Victoria Hislop has received four Specsavers Bestseller awards for her bestselling titles: The Island, The Thread, The Return and The Sunrise. 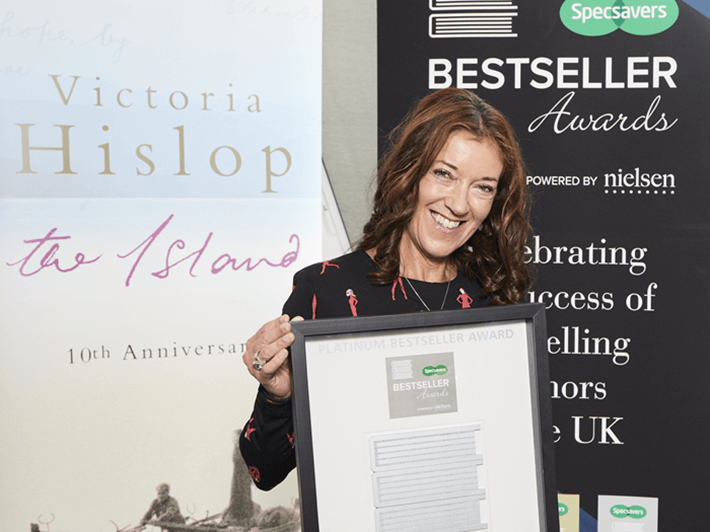 Her 2005-published novel, The Island, which was inspired by a visit to an abandoned Greek leprosy colony, receives a Platinum award for selling over a million copies. It became a 26-part Greek TV series and win Newcomer of the Year at the British Book Awards.

The Thread, The Return and The Sunrise, the last of which about the Turkish invasion of Cyprus published in 2014, received Gold awards for sales of over half a million copies.

Hislop was presented with the awards, celebrating the most successful books in Britain based on actual sales measured by Nielsen Book, at a ceremony at the Hachette offices in central London.

Her publisher, Mari Evans, managing director of Headline, said Hislop was “fast achieving national treasure status as a novelist”. She continued: “Her unique brand of storytelling, which is wholly immersive and so very evocative of place, has always resonated strongly with readers – and not only in the UK. Her domination of bestseller lists around the world means she is beloved by millions. Victoria encourages the most creative approaches to publishing in the teams that work with her and as one of those team members, I couldn’t be more delighted to see this tangible recognition of her bestseller success.”

Andre Breedt, managing director of Nielsen Book, added: “We are delighted to be able to recognise great sales of any title, but to be able to recognise four bestselling titles from the same author is an amazing achievement. And with her latest novel, Cartes Postales from Greece, at the top of the charts at the moment, an award for Victoria’s fifth bestselling novel can’t be far away.” (read the full story at The Bookseller)

Athens Daily Secret – now rebranded Savoteur is designed both for visitors and residents, every day, subscribers to the site are sent some glorious tip or recommendation on something delicious to see, do or taste in Athens … Read More
Load More