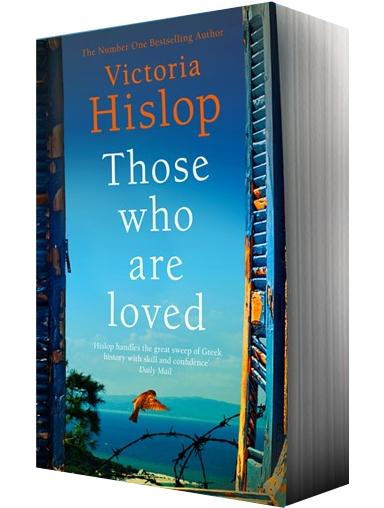 Set against the backdrop of German occupation of Greece, the subsequent civil war and a military dictatorship, all of which left deep scars.

Themis is part of a family bitterly divided by politics and, as a young woman, her fury with those who have collaborated with the Nazis, drives her to fight for the Communists.  She is eventually imprisoned on the notorious islands of exile, Makronisos and Trikeri, and has to make a life or death decision. She is proud of having fought, but for the rest of her life is haunted by some of her actions. Forty years after the end of the civil war, she finally achieves catharsis.

Victoria Hislop sheds light on the complexity of Greece’s traumatic past and weaves it into the dynamic tale of a woman who is both hero and villain, and her lifelong fight for justice.

“Those Who Are Loved has been germinating for a decade now, from the moment I first saw the island of Makronisos from the Greek mainland.  I was told it was uninhabited, but had been a prison camp for communists.  The discovery compelled me to read about the Greek civil war (in which many women played a role), but of course it also meant researching the events that led to that conflict as well as the long-term after-effects that are still seen in Greece even today.  Everyone knows how much I love Greece, but exploring this story has taken me to some new and disquieting places.”

Out now in Paperback!

If you want to get hold of any Greek books, contact Monica at the Hellenic Bookservice www.hellenicbookservice.com Tel: 0207 267 9499 … Read More
Load More